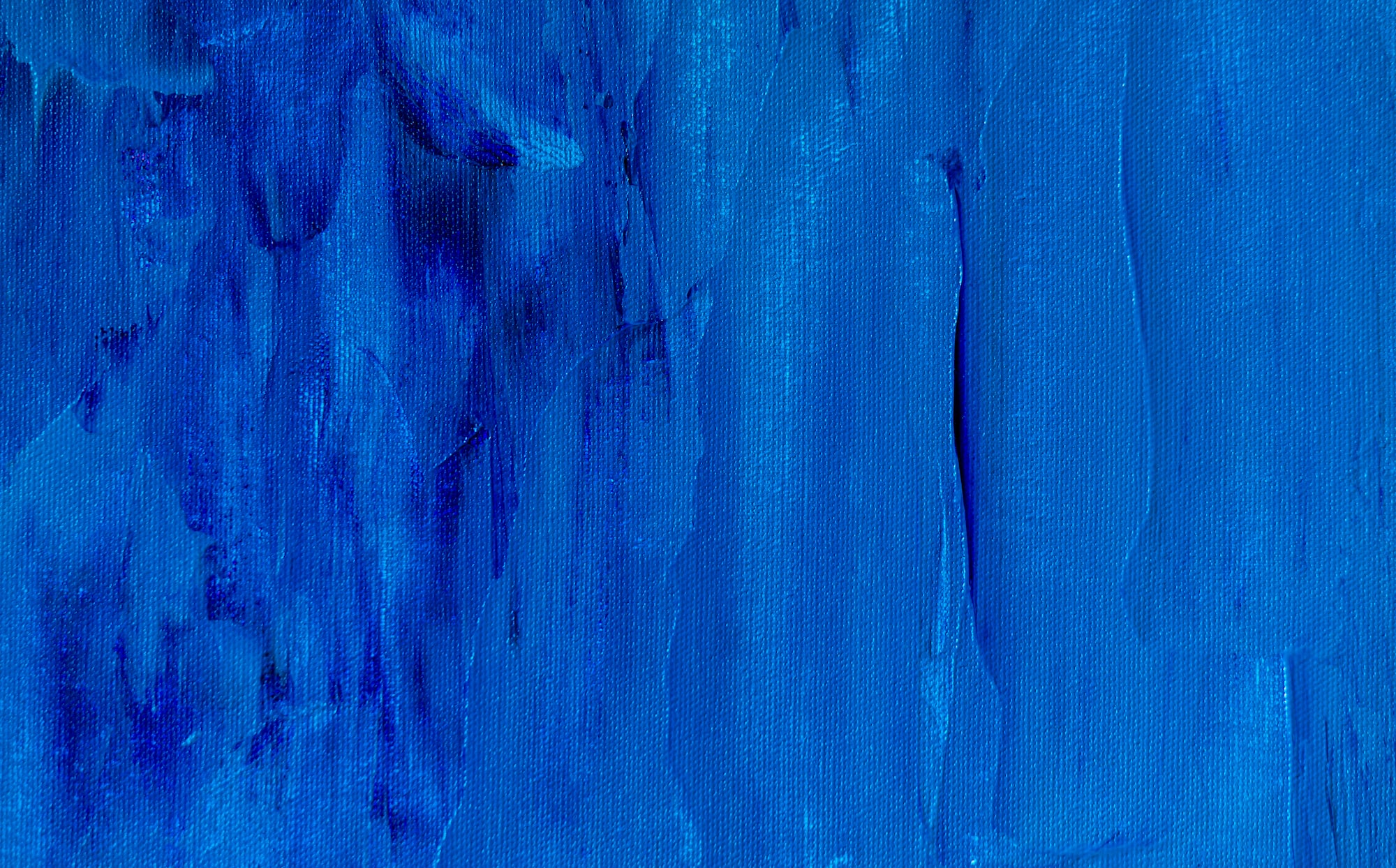 In the beginning, blue did not exist.

At specific points in history, life shifts: rhythms change, patterns of behavior evolve rapidly, and cultural values reshape themselves. The current global pandemic is one of these societal salients.

It's not the first time that this kind of transformation has taken place, of course, and examining a similarly radical revolution can inform how we view the current environment. If the color of the world is indeed changing, then it's only appropriate that one of the parallels that we examine be the astonishingly rapid rise of the color blue.

Red, white, and black were the colors of ancient cultures; from cave paintings to the dyeing of fabrics---blue was more difficult to source, process, and manipulate, and so it remained a second-rate color, especially in the western world.

The lack of blue in art and clothing meant that blue had little symbolic value; even up until the high Middle Ages, it was not even used for depicting the sky---most artists showed the sky as red, gold, or white. Whereas some colors took on cultural significance because of their widespread usage (the example of a small girl dressed in red, taking a pot of white butter to her grandmother, dressed in black in 'The Little Red Riding-hood' story comes to mind), blue was nonexistent in terms of meaning.

All of this, however, changed within a few decades in the 13^th^ century. Artistic expression was driven by development of the "Chartres blue", a new, brighter, and more luminous blue in glass form, heralded a widespread adoption of the color in stained-glass windows in churches throughout Europe. Advances in clothing production also elevated the status of blue in textiles. A massive increase in production of woad, the raw material used in dyeing fabric blue, along with the associated rise in demand for the color, led to entire regions such as Languedoc (France) and Thuringia (Germany) becoming wealthy as they specialized in the production of blue and its associated products. By the end of the 13^th^ century, a stable, bright blue cloth was widely available.

And as blue became more widely available, its semantic impact skyrocketed. Blue embedded itself into religion, as the new color was used to represent the robes of the Virgin Mary. It was also incorporated into the heraldry of various important families, and royalty was no exception to this affection for the new color. While the King of France was the first to adopt blue into his royal color palette, it was soon in use by the King of England, and later by kings in Germany and Italy.

In just a few short decades, then, blue went from having no cultural significance to representing some of the highest values of society: the purity of the Virgin, the power and prestige of royalty. The spectrum of meaningful color had expanded in short order, and the world was different as a result.

The world we live in is currently undergoing a similar seismic change. Previous patterns of working and living have been forcibly modified. One of the most foundational of these movements comes at the hands of "shelter-in-place" orders being enacted in various parts of the world: employees, no matter their industry or profession, are being forced to work from home.

The concept of working from home is not a novel. With the adoption of mobile devices and the increase in broadband availability both in private and public areas, a small segment of the workforce had already adopted this model. Like the color blue, however, it was a secondary option, and its cultural impact was limited.

The spectrum of work has now shifted. Shelter in place orders have forced a global workforce to work from home. What had been an alternative mode of work has now become the primary—all within a few short months, if not weeks. Remote work is color of 2020, and it is likely here to stay. Once blue arrived, innovation and investment drove production and created entirely new industries, and the forced adoption of this new mode of work will force a similar chromatic shift. People have a new color in their palette, and the world will be shaded differently.

In the wake of this transformation, the cultural impact of this shift awaits. In short order, blue came to be associated with health, power, and affluence. Will the same soon be said of working from home?

Certainly, from a business perspective, the value of this new way of working is already evident, particularly for organizations that have already developed the infrastructure to accommodate a pattern of remote work. This is not merely an installation of IT services such as a VPN, but also requires reconsideration of the established security mindset. While many of them may not have the scale to handle a complete and immediate transition to home-based employees, their transition to this brave new world will be smoother due to their preemptive investment in a revised security strategy.

This new approach to securing resources deemphasizes perimeter defense and elevates the role of identity. Various systems and names have been introduced (or reintroduced) to facilitate the practical development of these systems; zero trust and CARTA are a few strategies among many that attempt to translate this vision into a practical reality.

Businesses that have already begun this shift are likely to be less impacted by the maelstrom of change; while none welcome this new reality, organizations well-equipped for this new cultural value will be healthier in both the short and long term. Fewer disruptions in their business and continuity in their economic model will mean that they have a stronger chance of not just surviving, but being in the ascendancy as the crisis transitions into a different, hopefully milder, phase.

Even organizations with a solid security strategy, however, are subject to market forces. It is possible that the new dominance of remote work will alter the landscape of enterprise. Just as the rapid proliferation of the internet drove some organizations into the stratosphere and left others behind to languish in the "brick and mortar" mindset (the easiest example of this dichotomy is Amazon and local booksellers), working from home at this sort of scale has the potential to divide enterprise into strata of success. As a result, remote work may become semantically linked with health and with power---or their business-speak equivalents "profitable" and "innovative"---similarly to the new connotation blue acquired after it was employed by religion and royalty in the Middle Ages.

But the more profound potential for the cultural impact of working from home centers around individuals. In just a few short weeks the quarantine has shone a bright light on existing inequalities that are all-too-easily ignored.

The pandemic is revealing a caste system, one of whose demarcation lines is the ability to work from home. This flexibility is primarily dictated by both the availability of reliable broadband access and the specific occupation in question. Rural residents with limited network access, or those in specific sectors: the service industry, shipping and transport, food distributors, and government officials often have no viable option to work from a remote location—to say nothing of the healthcare workers who find themselves thrust to the front line of the pandemic.

For others, the ability to continue to work while staying home confers a wide range of benefits. The first is obvious: steady employment. With unemployment rapidly escalating, the pandemic is already having an effect on economies worldwide. If working from home means retaining a job, this primary benefit lays the foundation for the others that follow. The second advantage lent by remote work may be a bit more hidden: continued education for their children. Schools in 130 countries have closed, disrupting the learning of over 1.2 billion students. The same reliable network access which allows them to continue working also provides for the continued education of their children and puts those pupils at an advantage to their peers. Finally, the most striking benefit that working from home while quarantined bestows is a better health outcome. If the point of stay at home orders is to prevent interaction with outsiders, preventing the spread of COVID-19, then by complying with these guidelines and working from their homes ensures that those individuals and their family are less likely to fall ill.

These are not minor benefits: affluence, education, and health. And if the pandemic and working from home are revealing an existing caste system, it is also reinforcing it. Those with the ability to work from home are finding their wealth protected, their children keeping pace academically, and their expected health outcomes confirmed.

After only a few short weeks of stay at home orders, both businesses and individuals are already associating a work from home model and increased health, power, and influence. As the quarantine continues, that connection will only strengthen. COVID-19 has transformed remote work from a relatively unused mode of employment to the only viable option, and the benefits that that model currently conveys will ensure its association as not just a possibility, but as a preferred way to work for many.

After a long period in relative obscurity, blue's popularity exploded; the spectrum of the world expanded and blue rose to become to the world's favorite color in the space of a few short decades. Starting as an afterthought, it came to be strongly associated with positive ideals and well-being. Blue's ascendance was astonishingly rapid, but the rate of worldwide change in this early portion of 2020 makes it seem glacial: the global pandemic has the potential to establish working from home as a cultural value—and to equate it with health, affluence, and power in only a few short months. The color of the world is swiftly changing once more.

In Favor of the Shift